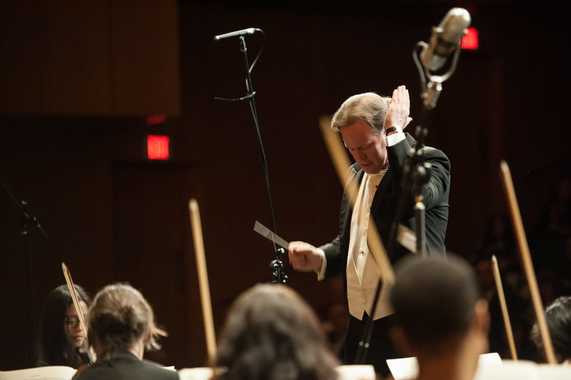 ​Justin Bischof is the Director of Music at The Church of St. James the Less, Artistic Director of The Canadian Chamber Orchestra of New York City CCO/NYC and of the NYC-based Modus Opera Company.  In addition to his growing presence in and around New York City with these ensembles, past seasons have seen him work with orchestras in the US, Canada, Europe, Russia and Australia. Recent highlights have included performances with members of The New Mexico Symphony, the Ottawa National Arts Centre Orchestra, the Vancouver Symphony, the Ensemble Orchestral de Paris and the State Philharmonic in Kavkazskiye Mineralnye Vody in the opening of their prestigious summer festival on the occasion of his Russian debut. This program included the Russian premiere of Samuel Barber’s First Essay as well as the Russian/European premiere of Jim Stephenson’s American Fanfare.   In 2008, he led the Australian premiere of Robert Ward’s Pulitzer Prize winning The Crucible in a run of fully staged performances with orchestra at the WAAPA, nationally publicized as a milestone in the Australian operatic scene.  Additional important opera premieres include the Hawaiian premiere of Menotti’s The Medium and The Telephone, working with members of The Honolulu Symphony and Hawaii Opera Theatre. As well, he conducted the World Premiere of Ager’s Concerto for Organ and Orchestra with members of the New Mexico Symphony in Albuquerque.
As Artistic Director and Founder of CCO/NYC, a group founded to promote Canadian artistry in NYC, he has infused his passion for helping others through music. Since 2007, each of CCO/NYC’s season has culminated in their annual ‘Transforming the Lives of Children through Music’ Children’s Benefit, netting over $400,000, which has enabled over 425 at risk children to attend a life-altering summer camp over the past 8 years.
As Artistic Director & Founder of The Modus Opera Company, he has conducted several staged productions including Mozart’s Cosi fan tutti, Don Giovanni and The Marriage of Figaro. Modus also has a concert series at such venues as CAMI Hall and Le Poisson Rouge featuring both up and coming and internationally acclaimed singers.
He received his Doctorate in Organ from the prestigious Manhattan School of Music where he later served on their Theory and Keyboard Skills faculty. He currently is a member of their Alumni Council. He has performed with numerous orchestras including The Zurich Symphony Orchestra, The Milwaukee Symphony, The Arkansas Symphony, and with members of the Orchestra of St. Luke’s in venues such as Carnegie Hall and The Tonhalle in Zurich.  His highly praised performance of Samuel Barber’s rarely performed Toccata Festivawith the Zurich Symphony Orchestra at the Tonhalle, Zurich, was a season highlight.
He was a featured soloist with the Milwaukee Symphony Orchestra under the direction of Music Director Andreas Delfs in the world premiere of The Revelation of St. John by Swiss composer Daniel Schneider.  He made a highly anticipated return appearance in Saint Saën’s Symphony No. 3 “Organ” under the direction of Maestro Delfs in a program shared with violinist Joshua Bell that included an improvisation on excerpts from The Red Violin. In introducing a live broadcast of the symphony on NPR, Maestro Delfs had this to say: “Justin has so much fantasy and color in his playing….the perfect soloist….it was indeed one of the highlights of the season” This recording has subsequently been released on the MSO website.
His ‘traditional’ organ performances are often combined with a showcasing of his improvisatory talents: "a fine performance of the Poulenc Organ Concerto with the Arkansas Symphony…..he followed with a rambunctious improvisation on the name of Music Director Philip Mann that brought the near capacity audience to its feet." Arkansas Democrat-Gazette
Described as ‘A master virtuoso’ in the Frankfurt News and ‘a master improviser of the highest order’ by the New York City AGO, Mr. Bischof is one of the world’s finest improvisers, having won first prize in the 2000 American Guild of Organists National Improvisation Competition in Seattle. The New York Times has called his playing “impressive, spontaneous, subtle…”
His all-improvisation performances have been met with critical acclaim throughout the U.S. and on several European tours to England, France, Germany, Czech Republic and Switzerland with performances in such venues as the Dom in Cologne, Frankfurt Cathedral, St. Paul’s Cathedral in London, as well as Carnegie Hall and the Metropolitan Museum of Art.
He can be heard on several recordings including the Dedication CD featuring the new Klais organ in Fairfield CT; The Milken Archive of Jewish Music on the Naxos label; and the world premiere of Aaron Miller’s Concerto for 2 Organists (commissioned by Mr. Bischof) with Ken Cowan and the Zurich Symphony Orchestra recorded at the Tonhalle on the Ethereal label.